Feminist strategies in peace and security are crucial to ensure fundamental rights inside and outside the European Union (EU). Hereby, a meaningful commitment from EU politicians towards a gender-sensitive response is key. For instance, sexual and gender-based violence (SGBV) at EU’s external borders can only be tackled by taking political action – by embracing feminist activism in policy-making – and by voting those politicians who do so.

According to the EU’s Strategic Engagement for Gender Equality 2016-2019, “promoting gender equality is a core activity for the EU”. It has been just last year that the EU has co-hosted a women Foreign Ministers meeting in Canada. Yet, the intensity promoting of women’s rights differs among each member state as well as their approach. Positive examples for feminist activism in governmental structures are France by officially referring to a French Feminist Diplomacy and Sweden by publishing a whole handbook on Feminist Foreign Policy. One of the key figures for feminist activism in diplomacy is Margot Wallstrom. From disarmament and non-proliferation over sexual health to trade policies -Sweden’s Foreign Minister embraces the whole dimension of feminist activism in peace and security policy-making.

Peace and Security is and has been a Feminist Issue

With those recent examples, one would think that feminist activism has finally entered the political space of the European Union and has paved the way for meaningful participation of all genders. Despite some achievements in this field, there is no time to rest and lean back. Au contraire, more feminist activism in external and domestic affairs is necessary. Hence, history has taught us that people might be entitled to human rights on paper, but need to demand repeatedly the full realization in Realpolitik. Already in 1915 feminist activists from civil society and governmental bodies came together to discuss peace and security issues during the International Congress of Women in The Hague. They demanded equal rights, meaningful representation and sustainable resources.

Only if the needs of all human beings are put into the centre of the EU’s security policies, we can realize qualitative peace.

Over 100 years later, the geopolitical peace and security interests might have changed, but the feminist demand for a human rights-centred approach in peace and security is still urgent. Thus, the EU faces right-wing radicalisation, religious terrorism, cyber-crimes in human trafficking as well as ongoing impunity of war crimes committed since the last century. In general, militarization has seemed to be the solution for security and stabilization. However, since centuries feminist activists are advocating a human rights-centred approach to tackle security challenges.  This includes the prevention of sexual violence, gender-balanced participation in peace processes, protection of human rights advocates in armed conflicts and a gendered analysis of trading weapons. Only if the needs of all human beings are put into the centre of the EU’s security policies, we can realize qualitative peace.

Above all an adequate gender-budgeting for sustainable peace-making, building and keeping is key. Politicians of the European Union shape the defence and security budget and its purpose. Consequently, they have the power to influence significantly the EU’s financial strategies on engaging in gender equality. One strategy is partnering with multilateral actors like the North Atlantic Treaty Organization (NATO), the African Union or the Organisation for Security or Co-operation in Europe. Within these partnerships, EU agencies have the opportunity to insist on gender-sensitive strategies.

To finally establish an inclusive human rights-centred security policy, more feminist activism from EU politicians is needed – and it is on us to vote for those who are showing the political will to do so.

One example is the involvement of the Human Rights and Gender Adviser of the European Union Advisory Mission Iraq’s at the first ever NATO Headquarters’ Gender Advisors Conference which took place on Friday 25 January 2019. Furthermore, EU Missions themselves have the potential to successfully integrate feminist strategies into their daily work. For example, in the field offices of the EU Monitoring Mission in Georgia have taken gender balance seriously and women comprise 50% of senior management positions. In addition to that, the EU agencies’ Zero Tolerance against Sexual Harassment Policies are another tool of feminist activism. Apart from multilateral and cross-agency cooperations, the EU’s strategy is to work with human rights advocates. EU representatives can regulate the intensity of legal assistance, physical protection and advocacy for human rights activists from and in conflict regions. These means are literally life-saving and essential for activists like Nadia Murad or Denis Mukwege fighting for fundamental rights.

Despite those strategies, the current challenge remains the lack of the EU’s clarification on gender budgeting in defence and security issues. Hence, each strategy can only result in a sustainable and holistic approach if financial means are spent in a way that is beneficial to all genders. By the time being, money has been invested in training women and girls for the purpose of SGBV protection. Financial means for tackling toxic masculinity during workshops with men and boys have been modest. To finally establish an inclusive human rights-centred security policy, more feminist activism from EU politicians is needed – and it is on us to vote for those who are showing the political will to do so.

Miriam M. Müller
miriam.mona.mueller@gmail.com
Miriam Mona Müller works at the UN Women National Committee Germany as well as for the Think Tank Polis180. She focuses on the EU’s external promotion of the Women, Peace and Security agenda, especially when it comes to sexual and gender-based violence. You can follow Miriam on Twitter at @MiriamMonaMue. 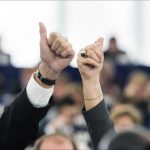 Where are the Women in Politics? EU Elections 2019