This year, Young Feminist Europe together with COFEM (Coalition of Feminists for social change) decided to join forces for an international campaign aiming to research and raise awareness on the topic of online gender based violence and how this targets in particular human rights defenders.

Are you familiar with the concept of Gender Based Violence?

Gender-based violence (GBV) is a global phenomenon that affects all societies, regardless of their nature. It disproportionately affects women* and girls  including transwomen and girls, and gender non-conforming individuals. Gender-based violence manifests itself in different forms, with a single objective: to threaten and denigrate another person with the aim of asserting power over them.

GBV in the online space is just that, another form of GBV. All forms of GBV (sexual harrassement, psychological violence, sexual assault, stalking, etc) share a root cause : gender inequality and the oppression of women, girls and gender non-conforming persons.  Women in countries with long-standing or institutionalised gender inequality tend to experience online violence at higher rates (The Economist Intelligence Unit, 2021).

Online GBV often goes hand in hand in the physical space, especially when it is in the context of intimate partner violence, honour crime and the repression of women’s human rights defenders.

What is online GBV?

or by enforcing harmful gender norms. This action is carried out using the internet and/or mobile technology and includes stalking, bullying, sexual harassment, defamation, hate speech and exploitation (ICRW, 2018).

Women, girls and gender non-conforming individuals are targeted and impacted by online GBV. In Europe, 9 million girls have experienced some kind of cyber violence by the time they are 15 years old. Globally, women are 27 times more likely to be harassed online. (European Women’s Lobby, 2017). Some women are particularly exposed, such as women’s rights defenders, activists, politicians, journalists, bloggers and public figures. Black women, women of colour, young women and LGBIQI+ people are disproportionately affected.

Online GBV can take many forms. The most common ones are:

Despite often being perceived as a less serious form of GBV, online GBV is a violation of the human rights of the survivors and it has important consequences on their health and wellbeing.  9-out-of-10 women report that online violence harms their sense of well-being. More than a third of women state that cyber violence has led to mental health issues. (UNFPA, 2021)

Additionally, online GBV has important consequence on the political and civic participation of women, girls and gender non-conforming people. It silences their voices, and has adverse economic impacts for those who depend on online presence for their livelihood. In a recent study, the Economist Intelligence Unit found that 3 out 4 survivors of online GBV were afraid of online violence escalating into real world threats, and 1 out of 3 said they thought twice about posting any content online. (The Economist Intelligence Unit, 2021)

Online GBV is often perpetrated by partners and ex-partners, anonymous individuals, but also state actors. More than half of women who reported experiencing online GBV knew the perpetrator (The Economist Intelligence Unit, 2021). The common denominator among online GBV perpetrators is  that they hold patriarchal beliefs of male and heterosexual dominance, and that the abuse happens happens in a cultural and institutional context that normalises violence against women, girls and gender non-conforming people.

They are at significant risk of sexual harassment and gender-based violence due to the nature of their work, including in the online space.

There is a pattern of backlash and abuse perpetrated by patriarchal systems and individuals benefiting from the status quo, when the work of human rights defenders is perceived as threatening the structures of gender inequality. This includes perceived threats to “traditional” conceptions of family, gender roles, religion and culture.

Online GBV against human rights defenders often aims at diminishing their credibility, silencing them and discouraging them from pursuing their fight for the realisation of gender equality and women’s rights.

Women, including transwomen, girls and gender non-conforming human rights defenders are at significant risk of sexual harassment and gender-based violence due to the nature of their work, including in the online space. A study by Amnesty International found 1.1 million hostile or abusive tweets targeting 778 women journalists and politicians from the UK and the US. Women of colour, particularly black women, were more likely (34% and 84% respectively) to be impacted than white women. (Amnesty International, Troll Patrol, 2018)

This online GBV needs to be analysed in the broader context of GBV, misogyny and rise in the backlash against HRD. The rise of far-right parties, religious fundamentalism, populism and authoritarianism in Europe directly impacts the work of WHRD. For example, in Poland and Hungary, the far-right governing bodies have been driving a patriarchal political agenda, encouraging the withdrawal from the Istanbul Convention that seeks to end GBV, restricting women’s reproductive rights, shrinking spaces for right-based civil society, undermining independent journalism and challenging LGBQTI+ rights. In 2021, The Commissioner for Human Rights of the Council of Europe stated in a country memorandum for Hungary that they are “worried and alarmed by the sustained smear campaigns against human rights defenders and investigative journalists, which are carried out with the aim of stifling civil society (…)”.

More than 1 in 2 women European parliamentarians reported sexist online attacks on social media. Those dedicated to the fight for gender equality and ending GBV are particularly targeted. (GIZ, The influence of gender-based online violence on political and societal participation of women and girls, 2022)

Ever heard of doxxing?

Doxxing is the act of revealing identifying information about someone online, such as their real name, home address, workplace, phone, financial, and other personal information. That information is then circulated to the public without the victim’s permission. (Kaspersky)

Doxxing is used against HRD to make them fear for their safety.

Check out the Twitter thread from AccessNow on doxxing for more information: https://t.co/XJHuVUEhnh”

Read about the experience of Clara Sorrenti a well known Twitch Streamer and LGBTI+ advocate:

A few weeks after being doxxed and having anonymous trolls send armed London Police officers to her doorstep with false threats, Clara Sorrenti, a popular online streamer and a transgender woman, has been allegedly doxxed again. Sorrenti, best known online as Keffals, often speaks about issues facing the LGTBQ2 community, specifically the transgender community.

What is hate speech?

The United Nations define hate speech as the “offensive discourse targeting a group or an individual based on inherent characteristics (such as race, religion, disability, sexual orientation or gender) and that may threaten social peace”. It can take place both offline or online.

Women and gender non-conforming people are the most affected group targeted by online hate speech. It affects them in many forms; the most cruel of which are rape ad death threats. Online hate speech clearly constitutes a threat for democracy and human rights but, what makes it  so destructive for its targets?

According to the Online violence against women journalists: a global snapshot of incidence and impacts study published by UNESCO in 2020 “the story theme most often identified in association with increased attacks was gender (47%), followed by politics and elections (44%), and human rights and social policy (31%)”.

Online platforms constitute in fact one of the most popular tools to spread information and to advocate for human rights. As stated by SAFEnet, there is nowadays a certain “impossibility to abandon the use of social media platforms to campaign for human rights issues”.

This implies women and gender non-conforming HRDs facing an increasing spiral of attacks on the web. With OGBV, they are not only “attacked only for their opinions, but also for their identity as women or other gender and sexual identities”.

The gendered online targeting of Nidzara Ahmetasevic is not an isolated occurrence, but forms part of a pattern of harassment against Bosnian women human rights defenders working with refugees and migrants. As stated by FrontLineDefenders Nidzara, in January 2021 reported to police the gendered online harassment she has been experiencing on social media and the threatening messages she has Some messages contained threats of physical assault and rape, while others are insults containing sexualised content, such as calling her a lesbian and immigrant’s whore.

Governments need to prioritise tackling online GBV to ensure a safe digital space for all, particularly women and girls.

Our key recommendations for policymakers include:

Recommendations for practitioners and researchers

What can you do as a GBV practitioner or researcher to help tackle online GBV? Here are our 3 key recommendations:

Donors can play an important role in setting and example and leading the way in tackling online GBV. We call for them to:

There are several feminist organisation already doing amazing things to tackle online GBV. If you are a GBV practitioner or simply a woman online, you can benefit from this (non-exhaustive) ressources’ list!

To recap the highlights of our joint campaign with COFEM, we have organised on the 25th of November a Live Q&A on Instagram and LinkedIn. Follow our platforms to know more and re-watch our lives on Instagram or LinkedIn/YouTube.
Also read the blog post on the OECD Website, by clicking on the visual below:

“Be Aware of the Malware: When technology and gender-based violence meet” written by Nassima El Ouady from Coalition of Feminists for Social Change (COFEM) and Antonella Crichigno from Young Feminist Europe. 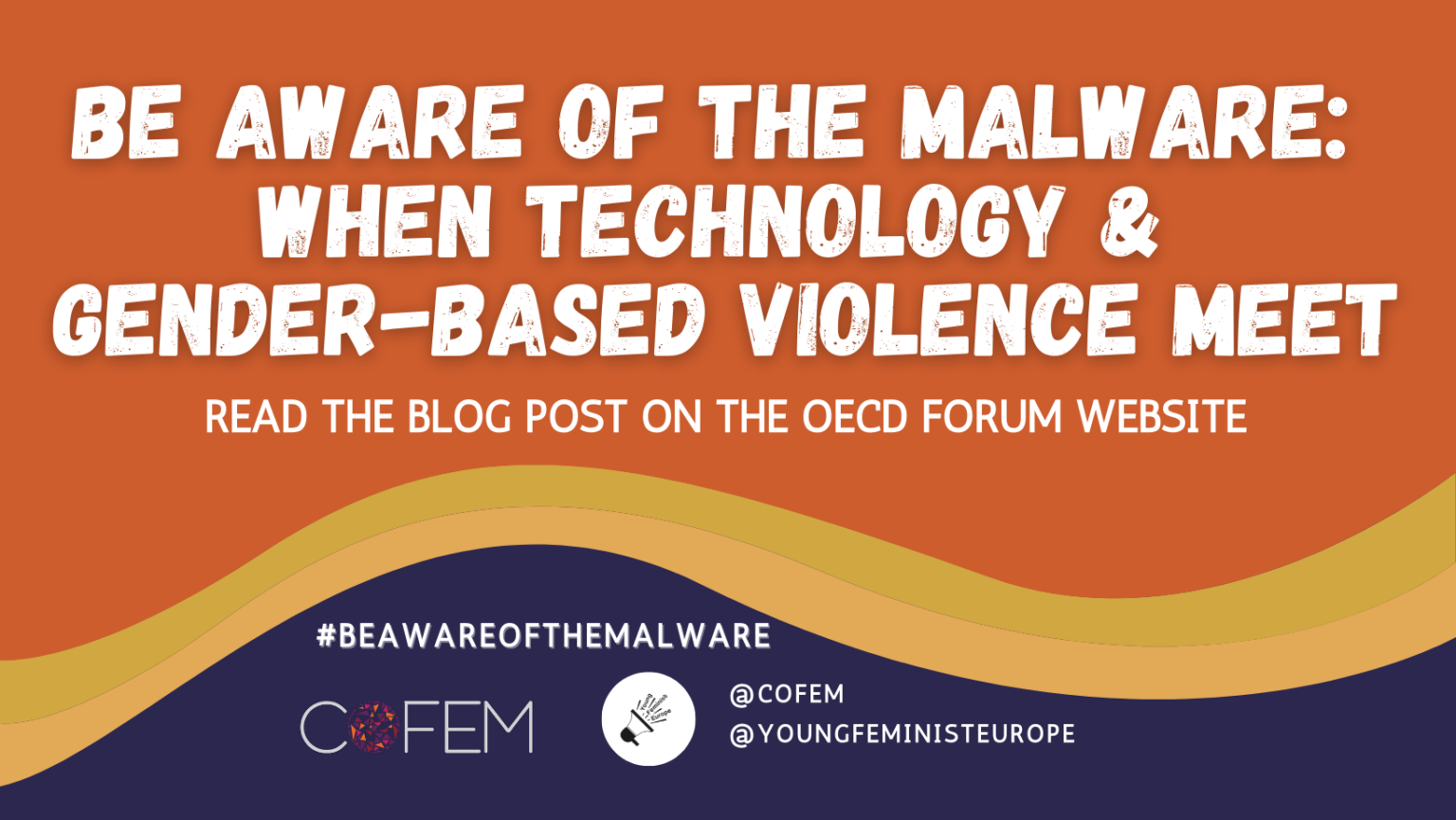