Gender based violence and COVID- 19: A view from international soft law. 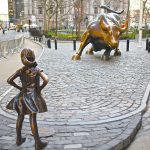