Claire is attending this year’s AGORA young feminist summer school. Her place has been kindly sponsored by the European Women’s Lobby‘s Scottish members from Engender who offered funding for a young BME feminist from Scotland to attend. Together with them we’ll be hosting a series of blogs by Claire blogging live from the AGORA, and European Young Feminists is reblogging them! Here can you read all about last Thursday.. You can follow Claire on Twitter as @ClaireShrugged.

Feminist Summer School exceeds my every expectation. Our first session sets the tone for everything that follows, establishing our core values: to speak with intention, to listen with attention, and be mindful of the group. As we share collective responsibility for the conversation and how it impacts on our fellow participants, everyone tries to be particularly conscious of the needs of others – an early lesson on how to successfully translate feminist principle into practice, the value of which becomes apparent as the day continues. This element of care enables honest and open discussion, and truly creative thought flourishes. Critics of safe spaces perhaps do not always see how, in certain circumstances, they enable rather than hinder discussion. And there is no end of challenge to our opinions, even those closely held – as one participant observes, “there are many feminisms here, not one feminism.’’

We are all curious about our sisters: where their experiences match our own and where their experiences are different. Our contexts are diverse in this group – 49 women representing 22 countries – and there are factors of race, disability, sexuality, class, faith, language, etc. shaping our individual lived experiences in a vast number of ways, so that curiosity is pressing.

There are many shared concerns, particularly the malaise that sets in with the popular misconception that we have achieved equality now, that we don’t really need feminism any more, a falsehood that enables the erosion of advancements that have already been made towards equality. This perception that equality exists erases ongoing social inequalities. The rise of fascism in Europe, of right-wing politicians propagating misogyny, racism, homophobia, classism, and anti-immigration rhetoric is also causing a palpable worry that transcends borders. We discuss how austerity disproportionately impacts women, the intersection of disability and gender politics that is overlooked in so much of the feminist movement, and how in conservative countries – even in Romania, where the procedure is legal – abortion and other aspects of reproductive healthcare are made so difficult to access.

During the lunch break, these conversations continue at an informal level, women seeking out women whose perspective has resonated with them or overlaps with their own cause. I step into a discussion about the politics of Black women’s hair – how wearing it natural creates assumptions of radical politics in the vein of Malcolm X, and relaxing results in a whole host of assumptions about the politics of respectability. Through the conversation, parallels are drawn between the warped perceptions connecting Black women’s hair with our politics and the similar implications projected onto hijabi women.

During the afternoon sessions there are three workshops to choose from, two of which we can attend, offering real insight into the European Women’s Lobby’s campaigning. The first I attend is Whose Choice? A workshop on prostitution, the sex industry, and why the European Women’s Lobby endorses the Nordic Model, which is to criminalise purchasing sex (almost always done by men), not selling sex (almost always done by women) with a view to ending demand. This subject is particularly contentious in the feminist movement, with a divide between those who focus on the significance of individual choice and those who consider the context in which choice is made. Pierrette, our facilitator, creates an environment that is conducive to respectful discussion – as a result, we feel unafraid to share our perspectives, even when they are contradictory at points. It is a constructive way to learn from one another. With umbrella organisations it can sometimes be difficult to pinpoint a specific set of beliefs, and I gain a new respect for the European Women’s Lobby because they have a clear set of principles through which prostitution is acknowledged as a form of male violence against women in their analysis and campaigning.

Then we move on to Yes Means Yes, a workshop on sex education and consent. The European Women’s Lobby are starting a project to promote healthy attitudes towards sexuality. It is an area about which most of us are passionate and Nadine, my fellow Scottish candidate, does this professionally. As always, the quality and the depth of knowledge in the room is impressive. This makes me hopeful: it is only through education that we can change attitudes towards sex, consent, and subsequently behaviour. As many as three million women and girls are victims of sexual assault or other forms of male violence against women. It is endemic. But we have the ability to change that.

Every moment filled with learning, Young Feminist Summer School is an exciting experience – but it is also tiring. So we go out into the city to unwind during the welcome party and get a sense of Brussels. It is a beautiful city, though I will never get used to the traffic. Despite the chaos of the roads, there is something fundamentally peaceful about Brussels. The balconies and bridges are so very picturesque, the architecture distinctly European. Yet, in some ways, Brussels is reminiscent of my home city: Glasgow. It has a friendly atmosphere. Le Space confirms that initial perception. There is wine and good food. On the bookshelves, I find George Jackson’s prison letters and pour over his words to Angela Davis. One of Zadie Smith’s less known short stories, The Embassy of Cambodia, sits between volumes of French literature. This is my type of bar.

All the same, it has been a very long day. And I am still hungry. Three of us slip out in search of that renowned Belgian cuisine: chips. Becca is the strategist, orchestrating a methodical sweep of these unfamiliar streets. It is not long until we are rewarded. The chips are hot, delicious, and melt in the mouth. Bliss for three euros. It is no disrespect to AGORA ’16 that I consider this moment one of the highlights of my trip. When we return to the bar, someone has added chalk art to the walls. ’’Feminisme et Frites’’ – the perfect combination. 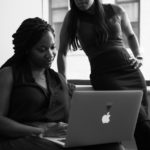 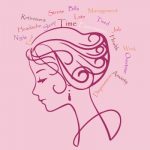 Trans and Non-Binary People Are Not Just Valid – We’re Beautiful!